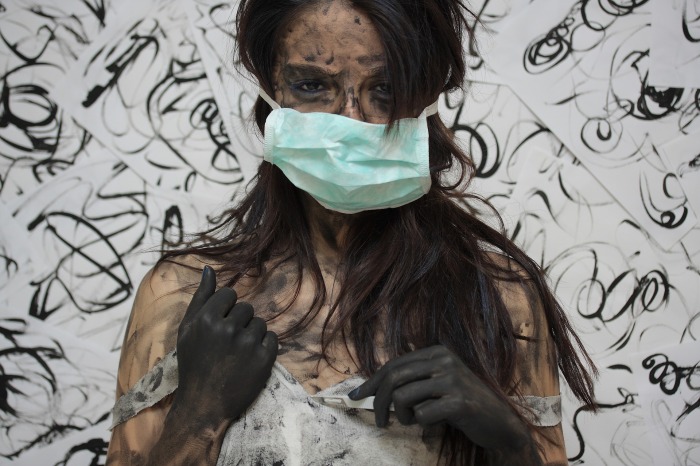 A Woman In This World

Everywhere she turned the world was a flame.
She suffocates on her words as they go filtered to the willingly deaf & blind masses.
Watching the world blaze as freedoms sizzle out.

Reeling from the feelings like an asylum resident in a straight jacket.
She’s not done fighting through the ashes.
She’s not done searching for the truth in the double speech and propaganda.

They tell her she’s lost her sanity. They tell her she has nothing left. She strides by everytime they attempt to strike her down. They don’t know how or why she keeps standing up. Tall and proud she wages a battle for those caught in the shadows. Take account of the pounds of flesh you have all severed in the slaughter.

How can you deny the truths laid before you?
They paid you off to switch your conscience off and tune out the logical. It’s them against us. It’s him against her. It’s you against me. We all end up getting in the way of the profit & bottom line is- we’re bottom of the barrel. When they’re in the red -we only see red flowing though the streets. Pouring from gaping sores.

She’s no innocent- she’s guilty of being a nasty woman, the kind you grab by the pussy while they all watch. Yet, they deny the crimes committed against her. Leave her sick. Leave her uneducated. Leave her hungry. Leave her in poverty after you pervert her & distort her humanity. Leave her in the alley to rot after she’s been sodomized & viciously assaulted. Haven’t we been here before?

Little do you know she’ll keep going:
like Imperator Furiousa; like Joan of Arch reincarnated; like the witches that never were in Salem; like the murdered Tutsi & millions upon millions of in the Nazi mass gravesites.

She’ll come with the force of their ghosts like a phantom army. Her meekness in your face, perceived to be weakness. But if you’re paying attention she’s the warrior wolf biding her time. You feed her resolve every time you rape the world & dishonor her by marking her an undesirable.

The marginalized are the majority. The silent one’s eventually find their vocal chords & resist.

Response to our Inspiration Call on April 4, 2017